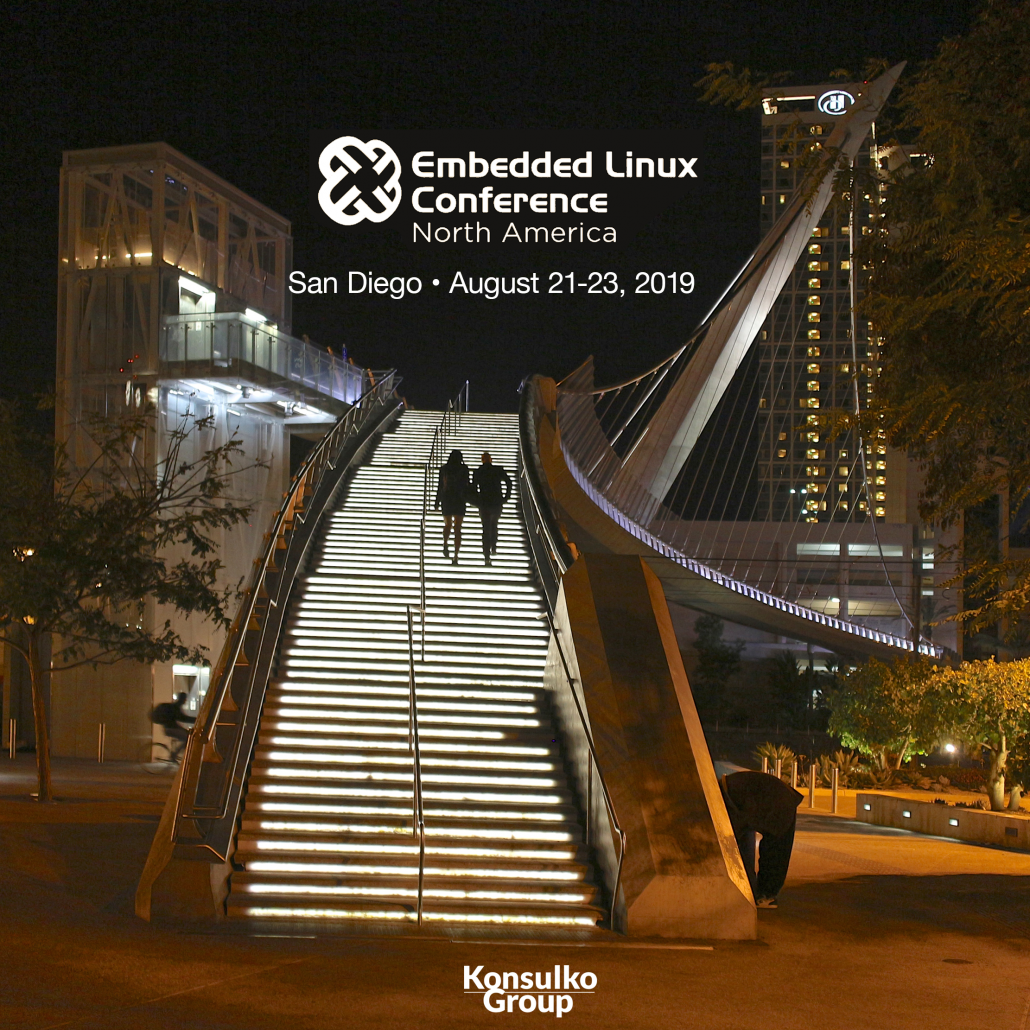 Embedded Linux Conference (ELC) is the premier vendor-neutral technical conference on embedded Linux and industrial IoT products. This year, ELC North America will be held in San Diego, August 21-23, 2019, at the beautiful Hilton Bayfront, right on the harbor and just over a pedestrian bridge from Petco Park and East Village.

On Thursday, August 22, Leon Anavi, Senior Software Engineer at Konsulko Group will present a Comparison of Open Source Software Home Automation Tools that allow users to customize the setup depending their own specific needs and manage devices manufactured by different vendors in one place. Leon will focus on popular open source tools, Home Assistant, OpenHAB and Domoticz, and explore the supported embedded Linux development boards on which these platforms can be installed, as well as the IoT with which they can interact out of the box.

Also on Thursday, Vitaly Wool, Senior Staff Engineer and General Manager of Konsulko AB, will give a technical talk on Secure Updates for a Memory Constrained XIP (eXecute In Place) System looking at technology that allows code to be executed directly from flash without copying the code to RAM first. The memory footprint can be optimized very tightly and this permits really low-power IoT Linux appliances. However, there is a big obstacle: no standard secure update process for such systems will work due to the very nature of XIP. How can you update the flash when it must always be ready to execute? This talk will provide some real world answers and examples.

The next day, Friday, August 23, Matt Porter, Konsulko Group CTO, will present a tutorial, Introduction to IIO and Input Drivers to briefly look at the Linux IIO and Input subsystems and how to gather information from hardware documentation to assist in software development. In a guided hands-on lab, students will write a new driver that leverages the IIO and Input kernel subsystems, and create their own game controller driver and use it to play a game on their devices.

For the first time in 2019, Embedded Linux Conference North America will co-locate with Open Source Summit North America. We hope you can join us, along with 800+ developers and technical experts from across the globe for education, collaboration, deep-dive learning, and some good times in San Diego.

On June 8th and 9th, Konsulko Group is proud to again be a Gold Sponsor of the 6th annual TuxCon conference in Plovdiv, Bulgaria, the 2019 European Capital of Culture.

Headquartered in California, Konsulko works with our customers throughout North America, Europe and Asia. Our European subsidiary, Konsulko Ltd is based in Sofia, Bulgaria.

If you are building a new product, we’d love to talk with you about engaging Konsulko’s engineering expertise and experience on your project. Or if you’re a software developer with a passion for Linux, please contact us about joining the Konsulko team.

In 2004, we founded Embedded Alley Solutions, and many things we did for the next five years simply felt intuitive. We were, after all, embedded Linux engineers with little business, customer relationship management and human resources experience.

Intuition served us well. We were doing agile-style software development long before it became mainstream, and soon it seemed like everyone knew our name. Our ability to communicate internally was second to none, using nothing more than emails and irc, creating a close knit team that felt as though everyone is in the same office, although the team was highly distributed.

Our recruiting practice was not so much about hiring as it was about building and fostering relationships with top talent around the world until the time was right for both parties to make the move. Outside the US, we tried to find the best open source talent around the world, rather than building an “outsourcing center.” We grew the company with that stellar talent and were acquired in 2009.

In the years that followed, every now and then I would read advice in an article or business book, written by some acknowledged industry expert, and think “That’s right! That’s exactly what we were doing at EA!” It was interesting and amusing to find out from others that what we had done on the business side helped make Embedded Alley so successful. I note only the business aspects here because the engineering talent we had was hard to match.

At Konsulko Group, I find myself having many of the same discussions with customers as we did back then, and I lean on that experience. One recurring discussion we had at EA was about our “offshore engineers,” as customers would often refer to engineers who resided outside the US. Embedded Alley had a small office in Europe, as well as single employees working from a home office all over the world. We always told customers that, no, we do not have a two-tier outsourcing strategy and these were not “offshore” developers. We simply searched for the best talent, with very specific software development experience, and that talent is not always to be found next door to our Silicon Valley office.

Fast forward 10 years after the EA acquisition. I recently found myself having the same offshore discussion with a customer. A specific principal level engineer was located in an European country not known as a center for high tech. Why was it that we were proposing to invoice him at the same rate as the other US-based principal engineers? This customer had done their homework and evidence showed that the average engineering rates in this European country are significantly lower.

I paused on the phone and thought back to our Embedded Alley days. What did I tell customers then? I realized that we never had a good, quantifiable way to explain to a customer why our engineering rates for developers outside the US, though lower than market rates in Silicon Valley, were significantly higher than the typical “outsourcing rates” in a particular location. We had talked about our hiring strategy and looking for the best talent wherever we might find it, but there were no metrics I could lean on.

Then I thought about the work this particular engineer had done at Embedded Alley; and then after the acquisition, he continued at Mentor Graphics (always working remotely from Europe). When he left Mentor, he contracted for Texas Instruments, then another US company, and finally, after the founding of Konsulko Group “rejoined” our team. Meanwhile he had had other opportunities, from contracting gigs to full time jobs in the US with H1B visa sponsorship.

And that’s when it struck me. This was not an engineer working in an offshore office at an offshore salary. “This is a globally employable engineer,” I said on the phone, “and we pay him a US level salary in order to retain him.” I continued to recount his work history and track record. The buyer understood and we moved forward with the deal.

What is a globally employable engineer? In my mind, it’s someone that could get a good job anywhere around the world due to demand of their skills. It’s someone with a minimum of ten years of experience, highly talented, with excellent English language skills and some customer-facing experience. The ability to travel when necessary helps a lot, and that means the ability to get a B1/B2 US visa for occasional visits. Such engineers may choose to continue to live in their home country, or elsewhere in the world, but tapping their talent does not come at offshore salary cost.

It is time for the high tech industry to move beyond Outsourcing 1.0, and embrace the Globally Employable model to access the best engineering talent on earth, wherever on the planet they choose to reside.